Jose Mourinho's decision to adopt a siege mentality ahead of tonight's London derby may have indirectly helped Chelsea to three vital points at the Boleyn Ground tonight.

Mourinho's recent series of semi-delirious rants, in which he insisted a campaign was afoot to prevent his team from winning the Premier League are unlikely to be regurgitated tonight after referee Andre Marriner gave Chelsea the benefit of the doubt at all crucial points of the game:

Minute 27: Eden Hazard's header is allowed to stand despite replays showing he scored from an offside position

Minute 93: Substitute Nene's shot is handled in the area by Gary Cahill but no penalty given

That Marriner appeared to err on the side of Chelsea for the game's main talking points should perhaps be no surprise. Last season Mourinho described the controversial official as "one of the best referees in the country - if not in Europe" - and it's unlikely that he'll be changing his view based on tonight's events.

Marriner's dreadful performance aside, West Ham, playing in front of a packed Boleyn crowd were as good as they have been at any point since the New Year - even if the Hammers' appalling Premier League run now extends to just one win in the last 11 games.

Indeed, there was little to separate tonight's effort from those which saw a return of three points from the fixtures against Manchester City and Liverpool here earlier in the season, bar perhaps a little luck and assistance from the match officials.

West Ham mustered a total of 18 shots at goal, but tellingly only five of those were on target.

Kouyate conjured the first of those 15 minutes in when he forced Courtois to make a point blank save following a clever pass from the reinstated Kevin Nolan, in for Alex Song. Then nine minutes before the break, Diafra Sakho missed a gilt-edged chance when he could only head straight at the 'keeper with the entire North Bank end goal at his mercy.

Eight minutes after the restart Chelsea's giant stopper was called into action to deny Sakho again, when the Senegal striker's close-range header was parried to safety (eventually). He was left equally frustrated when the Belgian snuffed out another header on the hour mark.

In imperious form, Courtois' only error came 18 minutes from the end of normal time when he spilled Valencia's drive - only to breathe a sigh of relief when Cahill dived in to prevent Sakho from turning the rebound over the line.

Chelsea, who were crowned Capital One Cup champions only 72 hours earlier posed few threats until West Ham began to push numbers forward late on in search of an equaliser. However it was the Blues who grabbed the game's only goal, which was enough to secure all three points - albeit in controversial circumstances. 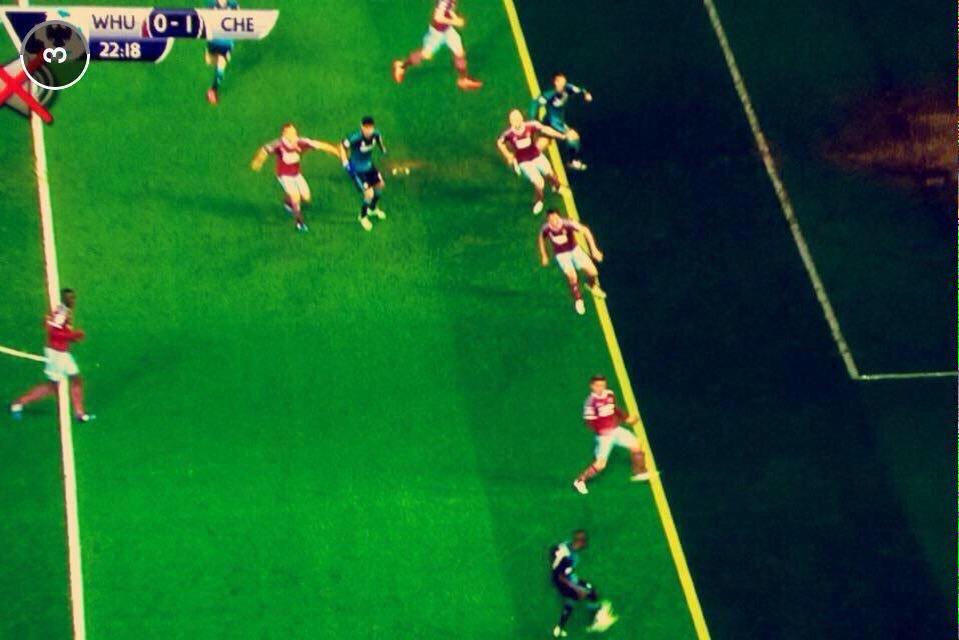 Hazard was beyond the last defender - far more so than when Kevin Nolan was denied a late equaliser at Old Trafford at the beginning of the season - when Ramires chipped the ball into his path . However his header was allowed to stand, despite West Ham's enthusiastic protestations.

The closest the visitors came to adding a second came when Adrian was relieved to see Ramires' shot rebound off the post before falling into his arms, 11 minutes into the second half. In the clear, with only the 'keeper to beat, the Brazilian opted for accuracy rather than power - and found neither.

In the end - which came after an additional seven minutes and 30 seconds, time largely added on as a result of the injury to Kouyate caused by Terry's cynical check - Ramires' miss proved inconsequential and Hazard's goal enough to secure all three points.

Tellingly perhaps, the Hammers left the field to a resounding chorus of approval from the home fans. Whilst Chelsea may have won the battle, they were certainly made to fight all the way. For West Ham, for once, it was an honourable defeat.

After a Great team effort & performance tonight against Chelsea,we deserve absolutely get something!Just keep working hard for the next????

Joey O'Brien
Did not play.

Matt Jarvis
Did not play.