West Ham United's run of games without a win extended to four on Sunday afternoon following a disappointing draw at home to West Bromwich Albion at the Boleyn Ground.

Slaven Bilic's side had only won twice at home this season prior to today, but for the first 45 minutes it looked as if that particular stat was set to be boosted after they controlled the opening half and took a one-goal advantage into the break.

But once again the Hammers contrived to throw away a promising start by conceding a sloppy equaliser five minutes after the restart and then almost losing the game, as the visitors - rejuvenated by Tony Pulis' half-time tinkering - enjoyed the best chances.

It had started so promisingly for West Ham who took the lead after 17 minutes. Diafra Sakho, who produced little else all afternoon won a free kick on the edge of the Albion box which Zarate exquisitely despatched into Boaz Myhill's top right-hand corner.

Six minutes later West Ham should have doubled their advantage when Aaron Cresswell's delicious centre was nodded wide of the target by an unmarked Cheik Kouyate - that coming before good chances for (the excellent) Lanzini and Sakho. They were all vital misses that subsequently proved to be costly.

Mauro Zarate's opening goal - as viewed from the Chicken Run

Albion - who had barely mustered a shot on target in the first half - returned for the second period with an additional striker in the shape of Ricky Lambert, long coveted by former manager Sam Allardyce.

And it was the Liverpudlian who was to restore parity just five minutes after the restart when his effort - a snap-shot that was heading wide of goal - took a wicked deflection off the hand of Winston Reid into the back of a stranded Adrian's net.

The former Southampton and England striker could have doubled his tally on the hour mark when a low free kick pierced West Ham's wall from a free kick, but Adrian was on hand to divert the shot wide.

But there was even better to come from United's Spanish stopper three minutes later when he somehow averted Rondon's point-blank header to keep West Ham on level terms.

Bilic, keen to record a third home win of the season introduced Andy Carroll to partner Sakho with 25 minute of normal play remaining. However those plans were torn to shreds a few minutes later when Sakho went down clutching his right thigh and immediately signalled for assistance - an injury that could well keep him out of action until the new year.

With Bilic introducing Nikica Jelavic in place of the striken Senegal international, West Ham maintained their two-pronged attack - although it was to prove toothless, with neither really bothering Myhill or his back four for the remainder of the match.

Although Zarate enjoyed a couple of half chances prior to being replaced shortly before the end of full time by ??7million signing Michail Antonio, making a rare appearance in claret and blue, West Ham rarely looked like snatching a winner and the game petered out with both sides talking a point each.

Which, on the face of it, would appear to be a fair result - even though Bilic and his squad will be hugely frustrated that they were unable to turn their first half dominance into three points. 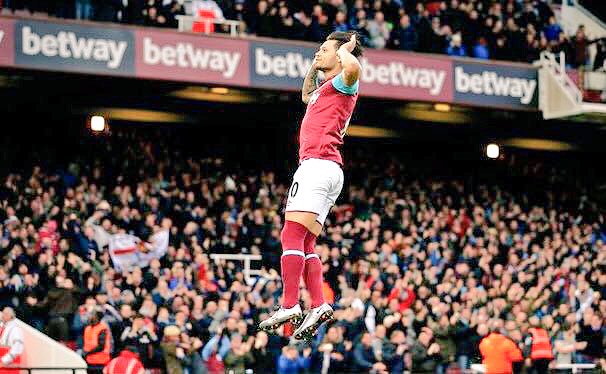 The draw takes West Ham's run without a win to four games, with a trip to Old Trafford on the horizon - although the point takes them back up to seventh in the table, having climbed back above Everton.