West Ham were denied the opportunity to record their first win in eight games deep into injury time.

Mike Dean, so often the scourge of West Ham over the years dropped another clanger at Villa Park this afternoon when he failed to award Slaven Bilic's side a cast-iron penalty for a clear hand ball by Ashley Westwood from an Alex Song shot.

However to concede a spot kick at the death would have been harsh on the hosts, who - despite having failed to win a Premier League game since the opening day of the season in August - were by far the better side in a game Hammers fans will be keen to forget.

Slaven Bilic's side, bereft of its key attacking personnel were distinctly second best and despite having drawn a fifth successive game, have now taken just six points from the last possible 24 - a sequence that has seen them slip towards mid-table obscurity following a promising start to the campaign.

Yet it was the Hammers who took the lead on the stroke of half time through Aaron Cresswell, scoring his first goal of the season, against the run of play.

Two minutes after Cheik Kouyate's glancing header had skimmed the crossbar, and deep into first half injury time, the left back took advantage of acres of room on the left-hand side to drive towards the penalty area from where he unleashed a powerful drive that beat Brad Guzan's low to his left.

For a Villa side already bereft of confidence, that should have been a killer blow. However the Hammers inexplicable allowed the hosts to take control of the second period from the restart and the only surprise was that it took them so long to equalise.

Tinged with controversy, the goal that levelled the game came from the penalty spot after Angelo Ogbonna was adjudged to have felled Rudy Gestede inside the penalty area. West Ham claims that Villa's striker impeded the Italian international appeared to have some merit - even if they were entirely ignored by referee Dean.

As the game wore on, only one side looked like winning the game and Adrian was called into action time and time again - whilst James Collins, fresh from signing a new two-year contract extension, ensured parity was maintained with a goal-line clearance 16 minutes from time.

Yet it was West Ham who should have been afforded the opportunity to take all three points when substitute Alex Song's shot was clearly handled by Westwood in the third minute of added-on time. Despite protestations from Bilic's men, the Villa midfielder was allowed to proceed unpunished by the referee - and the game subsequently ended in a stalemate.

Disappointed to only draw after going ahead with a great goal from Aaron Cresswell. Not sure about the penalty. West Ham fans were great. dg

Today saw Bilic start with nine players who were part of Sam Allardyce's squad last season - and the performance was not dissimilar in style to those produced on the road by Big Sam during his tenure at the club, with West Ham apparently content to sit deep and play a containing game.

Although marginally better than last weekend when they managed just 27 per cent possession against Swansea (it was 41 per cent today), on the road Bilic's team are currently a shadow of the side that began the campaign in such inventive, attacking fashion.

Whilst much of that is down to the absence of key creators such as Dimitri Payet, Manuel Lanzini and Victor Moses - and a key striker in Diafra Sakho - the team appear to be content to merely tread water until their return. 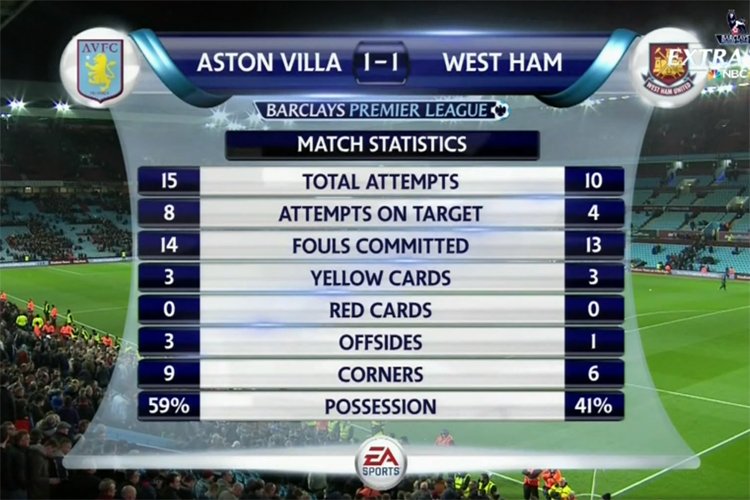 That said, Bilic will no doubt have been the happier of the two managers at the final whistle - with the point leaving Villa four points adrift at the foot of the table still waiting for their first win since the opening day of the season.

Adrian San Miguel Del Castillo
Made a couple of important saves, although was rarely tested despite Villa enjoying the lions' share of possession.

James Tomkins
A decent job since he was forced to retire at half time with a swollen eye.

Aaron Cresswell
Scored a belter - our first goal in four games - but achieved a pass completion rate of less than 50 per cent.

James Collins
When you need someone to put a foot in, you can always rely upon the Welsh defender. Was playing against his old side.

Angelo Ogbonna
A decent performance let down by conceding an utterly unnecessary penalty. Even though he was clearly impeded prior to the award.

Cheikhou Kouyate
Totally off the pace and barely involved, despite hitting the bar with a glancing header in the first half - one of the few occasions on which he got forward to support the front men.

Pedro Obiang
Kept it simple whilst shielding the back four.

Mark Noble
Another game that entirely passed the captain by.

Michael Antonio
No shortage of effort, but currently struggling to match his Championship performances at this level.

Mauro Zarate
The kind of greedy, self-indulgent display that proves so frustrating and for which he has often been criticised over the years.

Enner Valencia
Still working his way back to match fitness, the concern is that there's not enough there for this level even when he is.

Carl Jenkinson
(Replaced Tomkins) Dropped in favour of a centre half in recent weeks due to his defensive frailties. A decent run out, all things considered.

Alex Song
(Replaced Cresswell) Rested for the Southampton game but called upon for the final few minutes to restore some calm into the team.