Francesco Guidolin's Swansea City became the first team to beat West Ham at the Boleyn Ground in the Premier League since August 2015 when they all but ended West Ham's slim hopes of qualifying for the Champions League.

Slaven Bilic's West Ham went into the game needing to win all three of their remaining league fixtures to be in with a chance of pipping both Manchester clubs to fourth spot in the table.

However a comprehensive defeat at the hands of a team who only ensured their own Premier League survival a fortnight ago left Bilic and his players looking over their shoulders, rather than upwards.

On Tuesday night West Ham United staged their annual end of season ceremony - and most of the team appeared to have one eye on their summer holidays, as they were distinctly second best against a well-drilled but weakened City side.

However it's difficult not to feel a little for goalkeeper Darren Randolph, whose was also in goal for United's last home defeat in the league - the 4-3 reversal at the hands of Bournemouth last August. 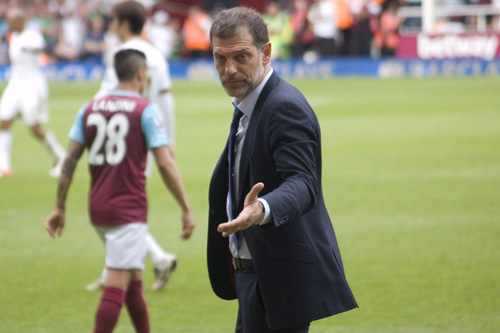 Despite eventually conceding four at home for the first time since September 2012 (a 4-1 Carling Cup defeat against Wigan Athletic) the Hammers started the game brightly, and with a little more luck one of Dimitri Payet's early free kicks could have broken the deadlock.

However the Hammers paid for their profligacy on 25 minutes when Wayne Routledge converted a low cross to give the Swans a lead they hadn't really deserved. 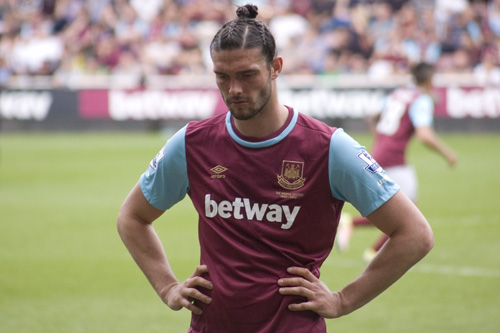 Stung by conceding that goal, the Hammers pressed forwards in search of an equaliser but found themselves two behind on the half hour mark; Andre Ayew providing the final touch on that occasion, as West Ham's defence was all too easily undone.

Swansea were in dreamland six minutes after the restart when Ki Sung-yueng put his team 3-0 ahead, after Modou Barrow raced away from Michail Antonio - who endured a difficult afternoon out of position at right back (again) - to centre for the South Korean international.

However the Hammers gave the home fans a glimmer of hope when Stephen Kingsley - who has spent much of the season in League One on loan - was credited with an own goal after the Hammers finally breached City's defence, with substitute Diafra Sakho heavily involved. 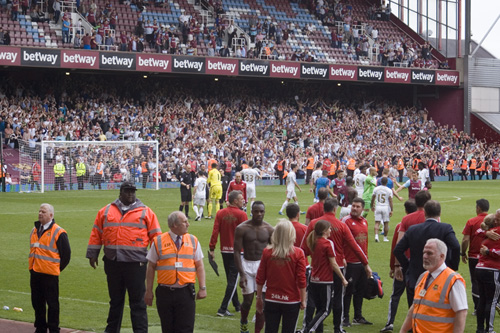 Swansea celebrate an unlikely win on the last Saturday at the Boleyn (Pic:KUMB)

Those hopes were dashed as Bilic's curiously under-par side failed to reduce the deficit further - and substitute Bafetimbi Gomis rubbed salt into United wounds when he added a fourth for the visitors deep into injury time.

Adrian San Miguel Del Castillo
Had very little to do, thanks to Swansea's profligacy.

James Tomkins
Did a decent job out of position but we lose the attacking impetus a proper full back provides.

Aaron Cresswell
A couple of excellent last-ditch tackles were the highlight of the full back's afternoon.

James Collins
The perfect game for Ginge, wh operforms at his best when we're under siege. The Welshman was immense in South Wales.

Angelo Ogbonna
A couple of hairy moments but overall another very satisfactory effort.

Mark Noble
The captain struggled to exert any influence on the midfield today.

Michail Antonio
As usual there was no lack of effort - but perhaps a little shortage in guile and quality.

Alex Song
Yet to really grab the bull by the horns since returning from his lengthy absence.

Mauro Zarate
This was the Argentine at his frustrating worst, holding on for the ball too long and failing to make an impact.

Nikica Jelavic
No shortage of effort, but a clear lack of quality in the opposition penalty box.

Enner Valencia
(Replaced Zarate) Another feeling his way back from injury, with very little to show for his efforts.

Pedro Obiang
(Replaced Song) Barely made an impact but helped shore up the defence.

Carl Jenkinson
(Replaced Antonio) That he's played more as a winger than full back this month says mcuh about Bilic's view of his defensive capabilities.

Reece Oxford
Did not play.