West Ham were lucky to take a one-goal deficit into next week's second leg after a turgid display by Slaven Bilic's side in Llubjana tonight.

The Hammers produced an insipid performance in their first competitive outing of the season, going down 2-1 to a Domzale side who whilst lacking in quality produced enough spirit to see off a ring-rusty opponent.

The hosts took an early lead after 11 minutes when Matic Crnic concerted from the penalty spot after debutant Havard Nordtveit was adjudged - extremely harshly - to have handled a cross.

However West Ham were to be behind for just six minutes after being awarded a penalty of their own; goalkeeper Maraval came out to clatter Winston Reid Harald Schumaker-style only for Mark Noble to send the 'keeper the wrong way from the resulting spot kick.

The teams went into the half time interval level at one each, but it took Domzale just four minutes to restore their lead when Crnic doubled his tally for the night with a well-taken effort.

It could have been far worse for West Ham as the hosts went close on a number of occasions as time wore on, and United had to be particularly grateful to their goalkeeper Adrian for keeping them in the tie - including a fantastic double save in the 88th minute. 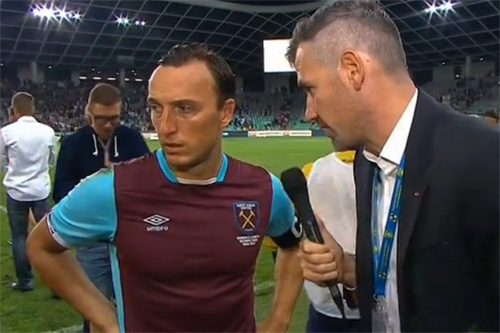 Even though they grabbed a vitally important away goal, West Ham will have to be far better at the Olympic Stadium next Thursday night if they are to progress any further in this year's Europa League competition.