West Ham were denied what would've been a much-deserved point at Old Trafford by yet another dreadful call from the match officials.

As has frequently been the case in the past against the Reds, the Hammers were left feeling aggrieved when a perfectly good goal was incorrectly adjudged to have been scored from an offside position by Felipe Anderson.

And ultimately it was to cost West Ham dearly as two penalties for the home side (naturally) were enough to seal all three points for Ole Gunnar Solskjaer's side, whilst Felipe Anderson's (eventual) equaliser, early in the second half proved to be a mere consolation effort.


Manuel Pellegrini, who insisted earlier in the week that his team would produce a much-improved performance was proved right as West Ham largely dominated the game, far more so than in any recent trip to Old Trafford.

And when Anderson turned sharply before firing past a prone David De Gea in the ninth minute, West Ham thought they'd grabbed their reward for an impressive start - only to see the effort ruled out for offside, despite Man Utd's Diogo Dalot clearly playing the Brazilian ONSIDE. 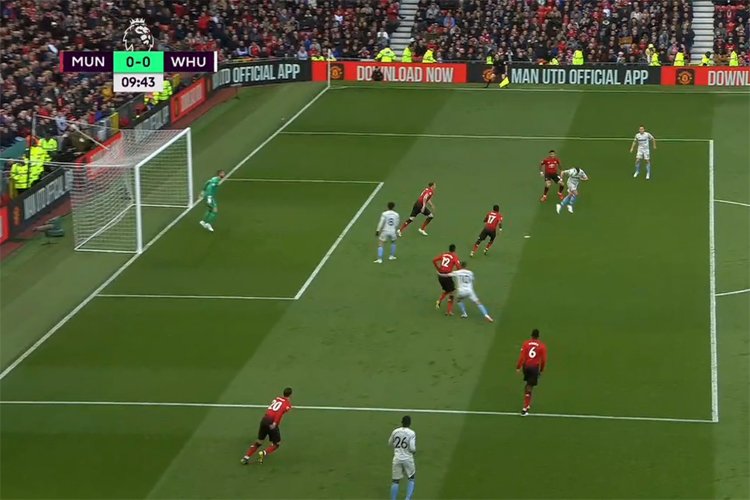 Did the lino see it? No daylight between Anderson and Dalot

So it was that the opening goal of the game arrived ten minutes later when Paul Pogba converted a spot kick, after referee Graham Scott determined that Robert Snodgrass had fouled Juan Mata inside the penalty box - which even replays failed to confirm.

Undeterred by the injustice of it all, West Ham came out of the blocks for the second half determined to continue the first half's good form and within four minutes of the restart, were level - largely thanks to the anticipation of Declan Rice.


The young Hammer was alert enough to spot De Gea's early throw and intercept, before the ball eventually fell to Anderson at the far post where the winger was perfectly stationed to prod the ball over the line.

Thereafter West Ham went from strength to strength and the best chances of the half both fell in the space of a few minutes to substitute Michail Antonio, who hit the bar with a thunderbolt of a shot before forcing a top-class save from De Gea to deny a goalbound header.

Agonisingly, with just ten minutes of normal time remaining the freshly-introduced Ryan Fredericks was left in a race on goal with Antony Martial and took the striker's legs away just as he was poised to shoot.

There was no question that this was a penalty and Pogba stepped up to fire home what proved to be the winning goal as once again, West Ham were sold a raw deal in Manchester.

Lucasz Fabianski
Made one very good save from Sterling, but everything else was relatively tame.

Ryan Fredericks
Looking like a Premier League player now the rest of the defence is settled too. 8 clearances, 2 interceptions, 2 tackles, 1 shot blocked.

Ben Johnson
Could you have more daunting a full Premier League debut? Yet he was only real beaten once, Sterling?EUR(TM)s fresh legs and burst of pace getting beyond him, and he stood up to Mahrez. Mahrez was poor and subbed, Johnson should take a lot of pride in that.

Angelo Ogbonna
One of his best games as a West Ham player. 6 interceptions, 4 clearances, 2 blocked shots - as close to imperious as he?EUR(TM)s ever been, especially in a back four. The General may have to wait.

Declan Rice
Not a glittering performance in the Rice repertoire, although one moment where he stepped forward, intercepted a pass then sprayed a ball wide to Anderson without a moment?EUR(TM)s hesitation was glorious. Forward passing is improving.

Felipe Anderson
The penalty was soft (to put it mildly) but Anderson drifted out of the game anyway.

Samir Nasri
A good 45 minutes to get into his legs for a comeback, but no impact on the game and made only 9 passes.

Michail Antonio
Stuck to his task, worked hard, one little moment to combine with Lanzini, but otherwise a hard game.

Andy Carroll
Not really ever going to be a Carroll type of game. Did well to get good contact on a bouncing and powerful cross by Lanzini which tested Ederson, but otherwise peripheral at best. Just over 50% pass success rate.

Manuel Lanzini
(Replaced Nasri) Looked the only real threat going forward, another promising performance and good that he got 45 minutes. Could see him close to starting at the weekend. Created the only chance.

Pablo Zabaleta
(Replaced Johnson) Did nothing wrong, had very little else to do, great ovation for him across the ground.

Mark Noble
Did not play.

Robert Snodgrass
Did not play.

Javier Hernandez
Did not play.