West Ham went goal crazy in their latest pre-season friendly as they destroyed a near full-strength Celtic side in their own back yard.

The former Scottish champions were considered to be a tough test for David Moyes' side given they are further advanced in pre-season, yet they were played off the park by the Hammers who thoroughly enjoyed their afternoon in the sun.

Three goals either side of the break gave West Ham a comfortable win against Ange Postecoglou's side, who had taken the lead moments after Angelo Ogbonna was forced to retire with injury - possible the only disappointment from an otherwise productive afternoon.

But the Hammers hit back with a quick brace from Michail Antonio, who gave the Celtic defence a torrid time during his 72 minutes on the pitch. His first, a cooly taken finish in which he sent a defender and the goalkeeper the wrong way before finding the net came via an interception from an alert Mark Noble.

And his second was the result of a killer counter attack, reminiscent of several goals scored by West Ham last season. Pablo Fornals' beautifully weighted through ball found the number nine who took advantage of an enormous gap left by 'keeper Barkas to put the Irons ahead for the first time in the game.

Skipper Noble, already with an assist to his name fired home from the penalty spot eight minutes before the half time interval after Antonio - who else - had been bundled over in the box by Soro.

But the hosts were given a glimmer of hope when Christie made it 3-2 just six minutes into the second half.

The Celtic man capitalised on poor defending by Ryan Fredericks and a dreadful mistake by substitute goalkeeper Darren Randolph to squeeze the ball over the line, despite the Irish international stopper's desperate attempts to prevent it from crossing over. 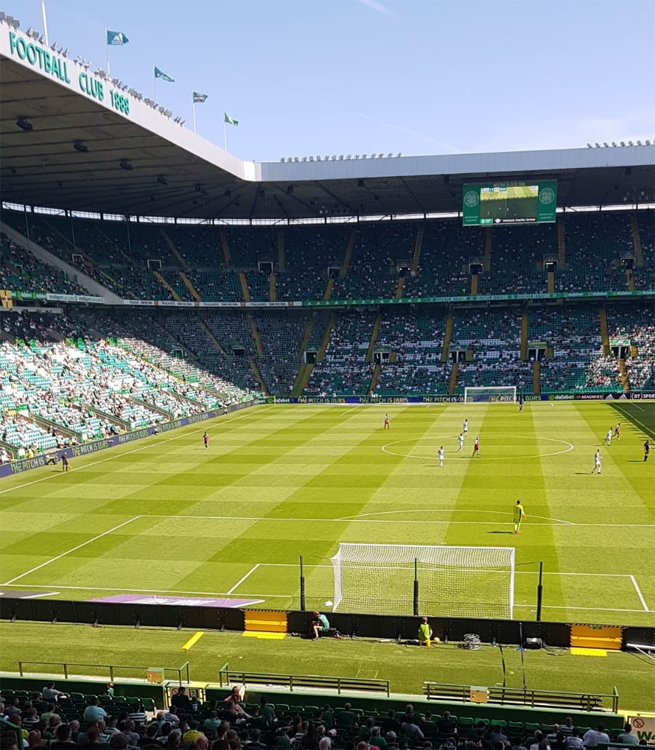 Around 30 Hammers fans managed to procure tickets for the game behind the goal [pic: KUMB.com]

Celtic's joy turned to misery - again - just three minutes late when Said Benrahma, possibly the pick of the West Ham players on show profited from yet another superbly timed through ball from Fornals.

The Algerian international dropped a shoulder as he raced into the box from another devastating West Ham counter attack, sending a defender and goalkeeper to the deck and leaving himself with an empty net into which to pass the ball.

With the hosts already looking well beaten, Jarrod Bowen moved into the centre forward spot following the removal of Antonio before producing a superb flick to register West Ham's fifth on 74 minutes.

And after Benrahma has missed a great chance to make it six, substitute Oko-Flex - who recently moved to West Ham from Celtic - did just that when he found the net from an acute angle as Bhoys defenders backed away from him.

Although it was clear to see where West Ham are currently lacking sufficient depth - most notably in the goalkeeping and defensive areas, and in attack where there is still no suitable back-up for Michail Antonio - manager Moyes will no doubt have been hugely enthused by the performance offered by his team.

Whether or not he is able to bring in the necessary additional personnel ahead of the new season remains to be seen. You may see highlights of the game below. 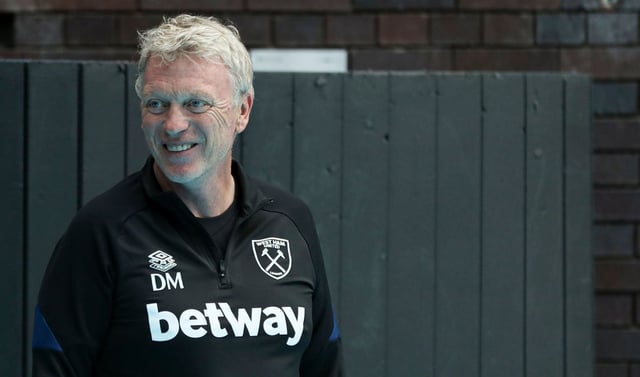 KUMB's Pink Palermo was one of a select few West Ham supporters who was inside the stadium for yesterday's game. Here's his verdict on West Ham's performance...

"One of the great football stadiums, and a club with a rich and proud heritage, but I was shocked with what I saw on the pitch on a roasting hot day in Parkhead.

The current Celtic team is simply awful. We were nowhere near full fitness, we are probably 14- 16 days away from that but we thrashed the best they had to offer. We should, by my count, have scored nine. The fact we only scored six flattered them.

Antonio battered their centre backs and when Bowen and Benrhama turned it on they simply couldn't contain us. The loss of Oggy early doors was a blow and his replacement, Diop looked shaky to say the least.

Huge sympathy though to the 18,500 Celtic supporters who turned up, they deserve better than what their traditionally tight fisted Board will fund. They gave the few Hammers in the ground a decent welcome and accepted the good natured banter sportingly.

We may get a different reception in a full blooded Europa tie, but on yesterdays showing, unless their Board get the chequebook out, the margin between the two sides will be wider.

We were decent enough yesterday but I reckon we have more in the tank, Rice, Coufal and Soucek for starters. Three or four additions and we could be double mustard.

Lukasz Fabianski
A welcome return for the Pole, who had very little to do bar pick the ball out of his net early doors.

Ryan Fredericks
One of a handful to feature for the full 90 highlighting David Moyes' lack of strength in depth, with Vladimir Coufal still absent. Beaten too easily for the second goal but otherwise a decent run out.

Aaron Cresswell
Another to feature for the full 90 and he looked a class above any of his opponents. Saw the funny side when winning a corner by backheeling the ball off a Celtic defender.

Angelo Ogbonna
Worrying. Injured after just five minutes and due for a scan on Monday to assess the damage.

Craig Dawson
A good enough performance but Moyes should be concerned that the former Watford man is now his most senior fit centre half - and one of only two.

Mark Noble
Allowed to dictate the play and though he seemed a little 'old school' at times compared to the rest of West Ham's fast, fluid midfield it was a solid performance capped with a well-taken penalty and an assist.

Manuel Lanzini
Playing in a slightly unfamiliar role alongside Noble in the centre, the Argentinian was a more than able stand-in for Tomas Soucek who is still enjoying a late break.

Pablo Fornals
Simply outstanding. Two assists with two of the best passes you're likely to see this season at any level. Should be a joy to watch this year.

Said Benrahma
A different class to anything Celtic had on the pitch. The goal was outstanding as was some of Said's passing. Seems to have bulked up a little since the end of last season. Very promising.

Jarrod Bowen
Took a while to get into the game but tormented Celtic in the second half and took his goal beautifully. Unsure whether he can stand in for Antonio at Premier League level but he was too good for Celtic and another player who is not so far away from his peak form, in terms of age.

Michail Antonio
Celtic's defenders will be having nightmares about big Mike for weeks. He tormented and bullied them ,scored twice and won a penalty. You can't ask for more than that.

Issa Diop
(Replaced Ogbonna, 5) Made one or two excellent tackles and interceptions but was badly positioned at other times and his distribution loose on occasions.

Darren Randolph
(Replaced Fabianski, 46) Made some excellent saves but blundered badly for Celtic's second goal. And that's why he's never made it at the highest level - a great 'keeper on his day, but simply not consistent enough.

Conor Coventry
(Replaced Lanzini, 66) As things stand he's first choice back up to Declan Rice - so it's key he's given minutes with the first team. Fairly quiet in this one but industrious as always.

Ben Johnson
(Replaced Antonio, 72) He's going to be in and around the first team squad once this year so like Coventry, it's important he's given time in pre-season. Not a huge influence on this one but solid as per usual.

Frederik Alves
(Replaced Dawson, 77) The young defender is one of one three fully fit senior central defenders at the club currently and has been impressing during pre season so far. Not much time to do so here but he coped well enough with everything Celtic threw at him (which wasn't much).

Armstrong Oko-Flex
(Replace Benrahma, 77) Little chance to impress but earned a chorus of boos from fans of his former club upon entering the fray and again when he scored West Ham's final goal of the afternoon.

Keenan Forson
(Replaced Noble, 87) After six years at the club the 20-year-old is ready to make the step up to the next level - although that will be the Under 23s, not the seniors just yet.