West Ham finished their pre-season programme with a respectable draw against Greek champions Olympiakos at the Boleyn this afternoon.

A first-half goal from Marlon Harewood got the Hammers off to a perfect start before Nery Castillo equalised for the visitors midway through the second period to send both teams home with a share of the spoils.

On a blustery afternoon in East London the Hammer started the stronger of the sides, and both Nigel Reo-Coker and Dean Ashton went close in the opening minutes. However there was a scare on 9 minutes for Ashton who fell awkwardly after a strong challenge; a collective sigh of relief was breathed all round the ground as he returned to his feet moments later.

West Ham's best chance of a busy opening 20 minutes came when Dean Ashton made a good run on the right flank before pulling the ball back perfectly for Bobby Zamora. However Zamora couldn't keep his volley down and his shot fizzed just over the bar from no more than 10 yards out.

Roy Carroll had had a fairly uneventful start to the game and had to wait for 21 minutes before being called into action; the big Irishman got down well to smother a shot from close range to keep the scores level.

Three minutes later the Hammers were ahead. A good header from Hayden Mullins found Marlon Harewood on the edge of the box, and the former Forest man weaved his way through three challenges before burying his shot into the bottom right--hand corner of the net. 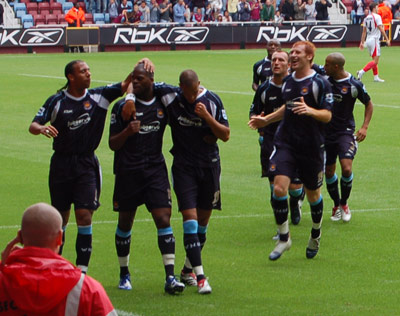 Marlon Harewood celebrates scoring the opening goal
Olympiakos created their best chance of the half on 32 minutes but were again foiled by some good work from Roy Carroll. On 37 the Hammers should have gone two-up but Marlon Harewood was wasteful from no more than six yards out following yet more good work from Ashton on the right-flank.

A number of half-time substitutions changed the flow of the game and the visitors came out the stronger of the sides after the break. Olympiakos had Jimmy Walker (on for Carroll) stretching twice before Lee Bowyer - playing at the Boleyn in a West Ham shirt for the first time since 2003 - had West Ham's first chance of the half with a fizzing 20-yard-drive that curled away from goal at the last minute.

Alan Pardew made further changes midway through the half and with the Hammers still settling into their new formation, Olympiakos struck. Sloppy defending from Hayden Mullins and Danny Gabbidon left Nery Castillo in space inside the box; the pacy winger finished expertly beyond Jimmy Walker to level the scores.

With both sides seemingly happy to take a draw chances thereafter were few and far between, although Carlton Cole - introduced as Marlon Harewood's replacement after 64 minutes - should have done better with at least one of the two chances presented to him in the closing minutes. Twice he found himself clear on goal, but a combination of poor finishing and good goalkeeping ensured the scores remained level.

Overall Alan Pardew will no doubt be pleased at finally being able to send out a team close to his first choice, although there will be one or two concerns for players such as Paul Konchesky and Dean Ashton who suffered knocks during the game. Next up for the Hammers are Charlton, who visit the Boleyn next Saturday on the opening day of the new 06/07 Premiership season.

Click to view all match reports by Graeme Howlett

Roy Carroll
Made some good saves on his first game back although his kicking was reminiscent of the recently-departed Stephen Bywater's at times.

Tyrone Mears
A solid enough home debut. Let the battle between him and John Paintsil (and possibly John Spector too?) commence ...

Anton Ferdinand
Looked as composed as he did towards the end of last season. A big season for Anton beckons.

James Collins
Had a year to settle, now looking the business. Anton and Gabbs will have a much harder run for their money this season.

Hayden Mullins
Many talk about replacing him, not many will perform better.

Nigel Reo-Coker
His first game of pre-season and the rustiness showed. Will improve as he gets games under his belt.

Lee Bowyer
Typical Bow, got stuck in and kept it simple.

Bobby Zamora
Zamora - on the left wing? Whatever next? Actually he did okay.

Dean Ashton
Looked lean, mean and dangerous. This could be his year.

Marlon Harewood
The goal was sublime. More of the same please.

Danny Gabbidon
(Replaced Ferdinand, 45) Not the best of starts, Gabbs looked like a man who hasn't played for a while. Which, of course, he hadn't.

Carlton Cole
(Replaced Harewood, 64) Looked energetic and wanted to be involved. Spoilt it a bit by missing a couple of humdingers towards the end.

Teddy Sheringham
(Replaced Ashton, 64) The old master is back for another season at the age of 142 (or something). May still yet have a part to play.