Iâm sure neither Alan Pardew nor any of his team will ever have heard of a now retired bank manager called Peter Foster.

Pete had a long and distinguished football career with what was then Midland Bank FC, towards the end of which he spent a few seasons with those of us much less talented than himself in the clubâs 8th XI. Having skippered the 1st XI for many years Pete had a unique way of motivating players. This involved having lots of simple but memorable little catchphrases that somehow always summed up precisely what we needed to be doing at that point. Thus it was I found myself shouting âLetâs play in their halfâ time and time again. Unfortunately, since I was barely in the same time zone as the players at that time, Fozzieâs instructions were lost in the wind in the mile or so between the temporary stand allocated to us at the Withdean and the pitch. Which is a shame because ultimately it was our tendency to defend far too deep when in the lead that cost us two possibly vital points.

The day had started less than promisingly. Though I had made three or four decent saves in the supporterâs match during the morning these were somewhat overshadowed by the 8 goals I had somehow contrived to let in. before. Still we were hopeful that the main event wouldnât be quite as one-sided. Team news was that, despite reports that he might be fit enough to take some part in the proceedings, Mark Noble had failed to shake off the knee problem that had kept him out of the Stoke match, leaving us with a starting line-up of Walker, Repka, Powell, Ferdinand, Ward, Mullins, Reo-Coker, Etherington, Newton, Sheringham, Harewood.

The proverbial bright start took place. Eight minutes in Matty went down the left and crossed over to Harewood. Marlonâs effort, which may have been an attempt on goal, was ungainly but the ball fell kindly for Reo-Coker to head home.

The home side enjoyed a fair bit of possession without really ever looking like breaching the defence which looked fairly untroubled throughout the first half. Brighton were limited in the main to efforts from outside the box. We did survive one heart in mouth moment when Harding went down in the box after Repka had looked at him in a funny way. Thankfully referee Pennâs immediate whistle was to punish the dive rather than to award the penalty and Harding picked up a deserved yellow for his actions.

Shortly after this scare we should have doubled the lead. A nice free-flowing move full of one touch lay-offs ended up with Teddy laying the ball into the path of Reo-Coker who pulled his shot narrowly wide when in all honesty he really ought to have scored.

The remainder of the first half was horribly scrappy stuff with Ward in particular risking altitude sickness by getting up well to clear a number of Brighton crosses that had the temerity to stray into his airspace. Neither side threatened to amend the score and we ended the half a goal to the good.

Obviously the Withdean is a far from ideal place at which to watch professional football and I sincerely hope that the various local politicians involved pull their respective fingers out of wherever they have them stored at present to allow the proposed new ground to be built. However, one of the charms of the current home is the efforts theyâve gone to make the place a home. This include the installation of a vibrant piece of modern artwork behind the temporary away stand to give those, like me, lucky enough to have seats in the back row, something to admire during the interval. To the uneducated eye it might appear that someone has just dumped a load of old toilets in a pile, but I am assured that the work represents a âvital reflection of the important issues facing modern civilisation in our timeâ. Probably. 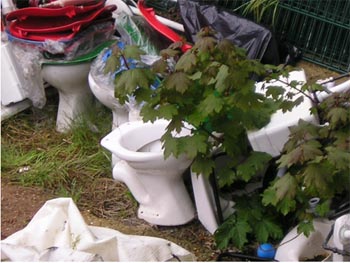 A load of old toilets dumped in a pile. Yesterday.

Brighton are in desperate trouble at the wrong end of the league and, whilst a defeat would not have resolved relegation issues one way or another, it was obvious that the second half instructions from the management had probably included something to the effect that they should go for it as they attacked right from the start. Knight caught Powell out of position down our left hand side and put in a low near post cross towards McPhee whose sliding effort went just wide of the near post.

The warning went unheeded. A few minutes later Knight fed Hart on the Brighton right and Hartâs cross found Hammond who had got inbetween the markers in the middle to head home and equalise the scores.

We had barely had a moment to break out the communal supply of Prozac when we were ahead again. A long ball from the back was aimed towards Teddy who, although he didnât reach the ball, made sufficient effort in his leap to see the ball come off Butters whose header fell straight to Marlon. The keeper came out with even less speed than I myself had been able to muster in the earlier supportersâ game, and Marlon prodded home from close range. That was effectively Teddyâs last contribution to the match as a few minutes later he was replaced by local hero Bobby Zamora. It hadnât been Teddyâs most effective of games, though he had been involved in the two rare chances that we had created. It later transpired that the youngster had picked up a hamstring problem which must be a worry with two big games remaining.

Somewhere in all this we had a half-decent penalty shout turned down â not for the first time this season. A defender aimed to chest a cross from our left but the bounce was far from true and the ball came off his outstretched arm. OK we have a habit of fluffing important penalties but maybe if referees awarded penalties when they were actually due rather than the one in ten we seem to get we might get a bit more practice at them.

The next spell was even scrappier than that which had preceded it. Etheringtonâs effort that forced a tip-over from the keeper was really a mis-hit cross, something that somehow seemed appropriate given the nature of the game. Then came the moment that, if we fail to make the play-offs, will give me nightmares. Newton broke down the right and sent over a cross towards the unmarked Harewood. It seemed the easiest job in the world to head in at the far post. Marlon elected however to try some sort of scissors kick in mid-air and the ballooned over the bar, much to our frustration.

The final 20 minutes saw us back further and further into our own half much to the supportersâ dismay. It was during this spell that I found myself uttering Fozzieâs catchphrase time and time again. Fletcher replaced the largely ineffective Etheringon with ten minutes remaining. We continued to invite Brighton to push on and, given their precarious position, it was an invitation that they were only too happy to accept. With a slightly baffling 4 minutes of stoppage time added on the home side forced a series of corners and, with barely a couple of minutes of added-on time remaining another cross from the right found Hammond to put away an exact copy of his first goal to equalise and give the home side a point that they probably deserved.

The final whistle saw some rather unedifying scenes as the players left the pitch. From my position at the back it was difficult to quite see exactly what occurred but it appeared that some of the travelling support vented their frustrations on the players as they left. This prompted a reaction of some venom from Repka who I saw shaking his arms angrily towards some fans at the front. Even from my vantage point it didnât require a degree in lip-reading to ascertain that Tomas, whose English skills are said to be less than perfect, has at least picked up two words of basic Anglo-Saxon, one of which is âoffâ. Not a pleasant incident and one from which I suspect neither side emerges with much credit.

My mood on the journey home was slightly improved by the news that Wiggyâs Whingers had gone down 2-0 at struggling Cardiff, a result that put us back into the play off zone, albeit by virtue of goals scored. We do like making it difficult for ourselves donât we?! More Prozac anyone?

Click to view all match reports by Gordon Thrower

Jimmy Walker
Not at fault for either goal where he might have expected more of a challenge from those in front of him.

Tomas Repka
Lost his man for the first goal and his distribution was a bit lacking throughout.

Chris Powell
Caught out of position on the left on a few occasions and it was noticeable that many of the problems caused by Brighton, including the two goals, came from that side.

Elliott Ward
Generally solid though the lines of communication between him, Ferdinand and Repka did go wrong resulting in the two goals.

Anton Ferdinand
The same comments made for Ward apply.

Nigel Reo-Coker
Got it right more often than not in the first half but should have doubled the score when put through by Teddy. Guilty, along with the rest of the midfield, of retreating far too deep in the second half.

Hayden Mullins
Often won the ball well but then undid the good work with a poor ball.

Matthew Etherington
Apart from the cross that led to the goal, and a miss-hit effort that worried the ?EUR~keeper he failed to trouble Brighton. Perplexing, especially in view of his apparent return to form a few weeks back.

Shaun Newton
A couple of decent runs but I?EUR(TM)d like to see him try to dominate more.

Teddy Sheringham
Involved in both goals, albeit indirectly so for the second, and set up Reo-Coker for a chance he ought to have put away. For all that he didn?EUR(TM)t quite seem at his best and it is to be hoped that the hamstring problem that caused his early retirement from the match is only a minor niggle.

Marlon Harewood
Caused problems but why he decided not to head that sitter in front of goal Lord alone knows.

Bobby Zamora
(Replaced Sheringham, 59) Given generous applause from the home side, he failed to overly trouble the Brighton defence.

Carl Fletcher
(Replaced Etherington, 80) Didn?EUR(TM)t really get into the game in the ten minutes he was on.

Stephen Bywater
Did not play.

Rufus Brevett
Did not play.

Luke Chadwick
Did not play.