A petition to replace the space formerly filled by the XL logo on West Ham United's shirts with an advertisement for the Bobby Moore Fund for Cancer Research UK has attracted almost 3,000 signatures.

XL went bust last week leading to the club removing the logo from the shirts ahead of the weekend visit to West Bromwich Albion. Instead of a logo the space was filled by a crudely sewn claret patch.

The club are understood to have been looking at potential replacements for XL this week. However a number of supporters are now imploring West Ham to fill the void with the logo of the Bobby Moore Fund for Cancer Research UK.

The club recently retired the number six shirt in honour of Moore, who began his career at the Boleyn fifty years ago this year. Supporters believe that installing his charity's logo on the shirts would be a fitting tribute to the greatest Hammer of all time.

One KUMB member, aaronhammer has been busy mocking up potential designs on Photoshop ... see what you think for yourself below. Meanwhile you can add your name to the petition by clicking here. 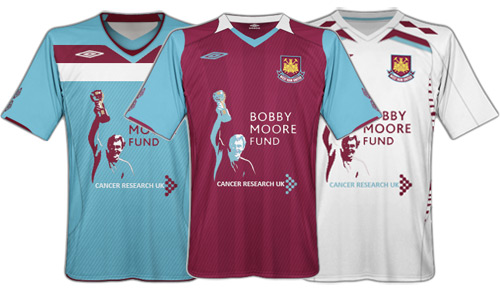 Good idea/bad idea? Have your say on the KUMB.com forum. Alternatively visit the Bobby Moore Fund for Cancer Research UK home page to find out more.
* Something to say about this story? Please visit the KUMB Forum to leave a comment.