The club has won an early round in the latest arbitration battle resulting from the Tevez affair.

Fulham have been told by a tribunal that they will not be able to base a compensation claim relating to the affair on the decision made by Lord Griffiths to award Sheffield United millions in damages.

Fulham are the latest club to seek easy money out of the affair, claiming that they lost out on Premier League prize money in compensation from West Ham United - being represented at this latest tribunal by Sir Ken Macdonald QC - in relation to the 2006/07 season, for what they claim is lost revenue relating to final league placings. West Ham's win at Old Trafford on the final day of that season saw them leapfrog the Cottagers to finish 15th - one place above Fulham in 16th.

The south west Londoners, led by Mohamed Al Fayed had tried to base their case on the unfathomable decision by Lord Griffiths to award Sheffield United some £25million in damages back in 2008 - a decision that shocked the world of football.

But the independent panel, in an adjuducation made today, have told Fulham that any forthcoming claim must be based on its own merits and not on Griffiths' earlier lapse of sanity.

"We agree with Fulham that, under the FAPL Rules, we have power to admit the Interim Award if we were to choose to do so. We also see the force of Fulham’s submission that it would be just and, in particular, convenient for us to do so in the present case," read the panel's findings.

"[But] we are frankly troubled by the prospect of the parties calling much of the same evidence before us as was called before the FA Tribunal and the time which will be taken up and the costs which will be incurred, perhaps unnecessarily, as a result. We are also, unsurprisingly, as Mr Beloff QC for Fulham suggested we should be, instinctively reluctant to re-tread ground covered, at least in part, by a previous Tribunal.

"However, we have come to the clear conclusion that it would be contrary to principle for us to admit the Interim Award in the present case. And we are unconvinced that there are considerations of justice and convenience which favour admitting the Interim Award and are sufficient to override the desirability of adhering to established principle, either generally, or in this particular case."

West Ham agreed to pay Sheffield United £4million a year for the next five season's after being ordered to cough up by Lord Griffiths, who somehow deemed that one player was responsible for the Blades' relegation. Fulham - who themselves only avoided relegation in 2006/07 having gained three points against a severely weakened Liverpool side on the penultimate weekend of that season - instantly signalled their intentions to sue the Irons on the back of the Griffiths decision.

You can read the full findings of the Independent Arbitration Tribunal here. 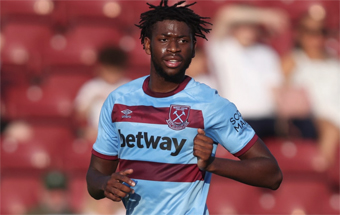