Fan banned for 'Brady out' flag

A West Ham supporter was ejected from the Olympic Stadium on Saturday afternoon for displaying a flag calling for vice-chair Karren Brady to be sacked.

Brady, who earned a cool ?1million bonus for relocating the club last summer has come under fire from many West Ham fans in recent weeks for the numerous issues that have blighted the move from Upton Park to Stratford.

But when one fan attempted to express his exasperation by displaying a large flag calling for Brady's head during Saturday's game with Arsenal, he was ejected from the ground after refusing to allow stewards to confiscate the item in question. 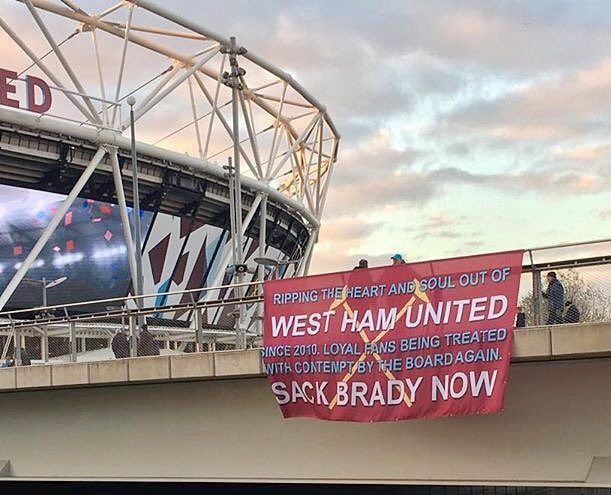 Since then a friend, speaking via the KUMB Forum, has revealed that the fan in question was subsequently informed that he is no longer welcome at the ground.

"The bloke ejected is a friend," wrote KUMB member thamesmeadhammer. "They wanted to confiscate the flag and let him stay. He said 'no'. so he was ejected even though he had the flag on show outside the ground before kick off.

"He has now been banned."

West Ham United FC and stadium operators London Stadium 185 reserve the right to refuse admission to any supporter with a flag that is deemed to be offensive or inappropriate.

The terms of condition and entry, taken from West Ham's website state: "Any article that might be used as a weapon, be deemed to be offensive or abusive, or compromise public safety, will be confiscated and or reported to the police."

However there are no guidelines to suggest what may or may not be considered to be offensive.

* Any supporters involved in incidents of a similar nature are advised to contact us here at KUMB or Amanda Jacks of the FSF on 07703 519555.
* Something to say about this story? Please visit the KUMB Forum to leave a comment.