Issa Diop and Pablo Fornals were the only players to feature in all five of West Ham United's August fixtures.

As the table below reveals, the outstanding young French defender was the only member of Manuel Pellegrini's squad to play every single minute of every match in the opening month of the season.

And even though he featured for little more than half as much as Diop, Spanish midfielder Fornals was the only other player to appear in all five games - even though four of his appearances came as a substitute.

Only six players - from a total of 23 used by Pellegrini in August - featured in all four league fixtures.

Key: '-' denotes not included in squad; '0' denotes an unused sub

Meanwhile young midfielder Conor Coventry enjoyed the fewest minutes on field, with just eight to his name after he appeared as a late replacement for Jack Wilshere against Newport County in the Carabao Cup.

The only player to feature in the first team squad and not make a single appearance during August was full back Ben Johnson, who was an unused substitute in the same match.

Taking the above figures into account, Pellegrini's most popular starting XI for the month of August was as follows: 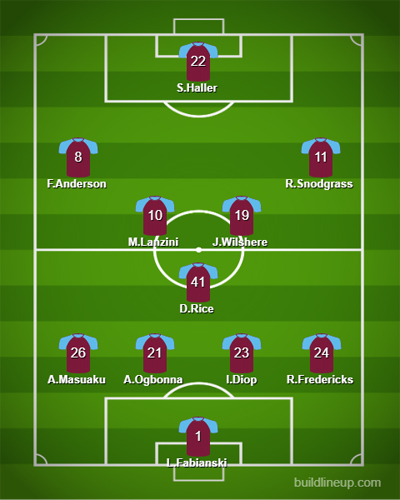