In-form Nathan Holland was on target again this afternoon as he grabbed a brace to help West Ham Under 23s beat Newcastle with comparative ease.

The 21-year-old scored twice as Dmitri Halajko's breezed past the Magpies with a 4-0 win at Rush Green on Monday lunchtime in their latest Premier League 2 Division 2 fixture.

And the victory sent West Ham four points clear of second-placed Manchester United at the top of the table, albeit with the Irons having now played a game more than the Red Devils.

Anthony Scully, another of West Ham's in-form youngsters opened the scoring with just five minutes on the clock when he converted Bernardo Rosa's cross - whilst Holland's first of the day on 33 minutes ensured Halajko's side went into the half time break with a comfortable lead.

Alfie Lewis added a thid on 64 minutes when finished cooly from the edge ofthe penalty box before Holland grabbed his second and West Ham's fourth 16 minutes from the end of full time to secure a comfortable win for United.

"I thought it was a really professional performance from us," Halajko told West Ham's website following the decisive victory.

"We kept the ball well, moved it from side to side and went through the middle when we needed to. A clean sheet always makes everybody happy and scoring four goals is something to be really proud of, so it was a near perfect performance for us." 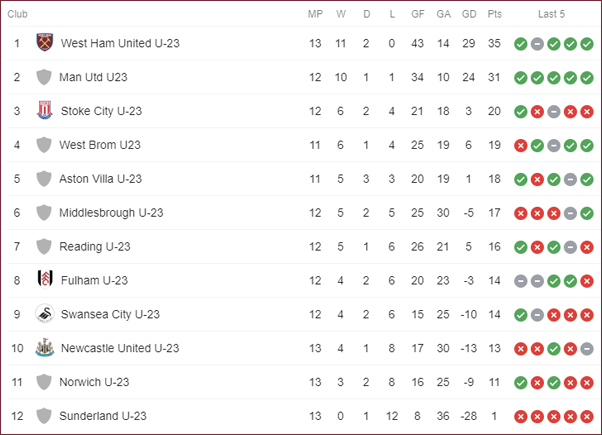