Supporters group Hammers United have written to their members and those who attended Saturday's protest to thank them for their support.

The group are believed to have attracted an audience of around 2,000 supporters to the demonstration,which was staged in the Olympic Park before Saturday's 1-1 draw with Everton.

"Hammers United would like to thank its members and all other supporters who stood together under the banner of 'West Ham United for Change'," read a statement published on their website.

"It was a display of unity and decorum which received favourable coverage and demonstrated our credibility.

"A marvellous gathering in the winter sunshine, with the stadium as its backdrop, saw around 2,000 disillusioned and frustrated supporters counted into one of the entrances to the protest site.

"They were there to take a first opportunity to publicly vent their discontent at the abject failure of this current board to deliver against its promises, on a day that saw them reach 10 years of their tenure as custodians of our great club.

"A minute's applause, on the day of the closure of the Memorial Gardens, was led by the Boleyn Poet Danny Fenn, remembering all of those we have lost from the West Ham family; the gathered crowd did them proud.

"Hammers United Chairman Paul 'Bubbles' Colborne led the address, and was joined by KUMB's Graeme Howlett, WHUISA's Sue Watson, as well as our own Andrew Byrne and Stephen 'Tross' Cross. Collectively they spoke of the anger that resides amongst West Ham supporters brought about by a series of undelivered promises."

And Hammers United were also keen to thank the attendees for their good behaviour which saw the demonstration pass peacefully - despite the efforts of some to vilify the event and those behind it.

"There were attempts in the media, from people with connections to the club, to discredit the protest," they continued. "One such attempt shamefully portrayed this as lynch-mob of a couple of hundred people.

"Despite this, a good-spirited protest with many families and young children in attendance saw a clear and firm message sent to the board that this is still our club. We have had enough of the lies and we will no longer tolerate being patronised by a board who treat us with contempt. 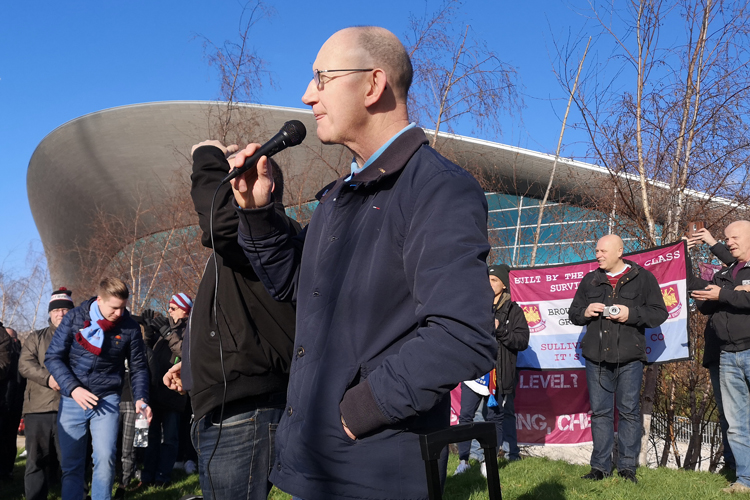 "Our conversations with, and coverage from, the local and national media have been hugely encouraging and despite spurious attempts to contain, constrict and exclude us by those who (for today at least) walk the corridors of power at the club, the suppressed voices of the claret and blue faithful are finally united and will be heard.

"This was the day the West Ham support collectively poked a finger in the eye of Baroness Brady, and her frankly ridiculous statement that the London Stadium move is the jewel in London's crown.

"It is of course no such thing, and as our very own 'Bubbles' closed the protest with a warming rendition of our famous anthem, the corporate spin and pedalled propaganda that has filled the board's bubble has now been well and truly burst."

The group, whose membership has swelled to more than 8,000 are now considering whether to follow up Saturday's success with further demonstrations against the board - but insisted they remain fully behind David Moyes and his players.

"The theme joining West Ham supporters young and old is that we are now 'West Ham United for Change'," continued the statement.

"As a united support, not individual or divided customers, we will no longer stand idly by while our history and culture are cast aside, our fan base is gentrified and we are pushed out of the club we love.

"We would also like to once more re-iterate that we have nothing but support for the manager, his staff and the team, who can count on us from the first to the last whistle. We know they will do the best they can with what they have got, as we look ahead at the fixtures and prepare for a relegation battle."