What's been happening in the West Ham world during the past 24 hours? Find out in our daily digest, featuring stories from the world's sporting media... 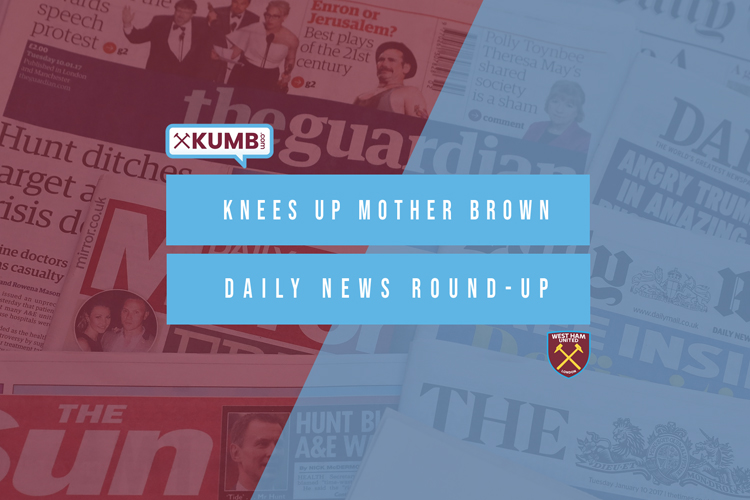 Bobby Moore's daughter visits Upney buildings to be named after footballers
The daughter of England and West Ham United legend Bobby Moore has visited the site of a housing development.
https://www.barkinganddagenhampost.co.uk/news/housing/bobby-moore-daughter-visits-upney-8079098

West Ham ‘on the prowl’ for signing
West Ham United remain ‘on the prowl’ for Barcelona forward Martin Braithwaite, with the Catalan side keen to move him on this summer.
http://sportwitness.co.uk/west-ham-prowl-signing-hammers-one-4-premier-league-clubs-keen/

Agent tells West Ham, Wolves and mystery suitor chances of signing forward*
Sevilla striker Youssef En-Nesyri's agent has told West Ham, Wolves and a mysterious Premier League suitor that they have no chance of signing his client this summer.
https://www.ezanime.net/agente-le-dice-a-west-ham-wolves-y-pretendiente-misterioso-posibilidades-de-fichar-al-delantero/

Armstrong Okoflex 'set to leave Celtic' as Parkhead youngster travels to seal West Ham switch
The Hoops teen is reportedly set to move on having only made two first team appearances since joining under Brendan Rodgers in 2018.
https://www.dailyrecord.co.uk/sport/football/football-transfer-news/armstrong-okoflex-set-leave-celtic-24383271

Fans are furious after hearing exciting talent is going to West Ham
When Armstrong Okoflex turned down the opportunity to stay at Arsenal in favor of a trade to Celtic in 2018, it was assumed that the highly-skilled winger had been offered the opportunity to play first-team soccer north of the border.
https://www.ezanime.net/los-fanaticos-estan-furiosos-despues-de-escuchar-que-el-talento-emocionante-se-va-a-west-ham/

West Ham have made their move for Giovanni Simeone
West Ham United have reportedly made a move to sign Argentine forward Giovanni Simeone.
https://sportslens.com/west-ham-have-made-their-move-for-giovanni-simeone/366990/

Man Utd's formation change should make Declan Rice transfer a priority
Red Devils boss Ole Gunnar Solskjaer is reportedly considering changing to a 4-3-3 formation, but to do so he will need a new defensive midfielder.
https://www.express.co.uk/sport/football/1453066/man-utd-declan-rice-transfer-news-ole-gunnar-solskjaer-formation-SNT

'Please keep your distance!
England star Declan Rice was urged to keep his distance from his Czech West Ham team-mates Tomas Soucek and Vladimir Coufal after the trio were seen joking at laughing by the pitch at Wembley on Tuesday evening.
https://www.dailymail.co.uk/sport/sportsnews/article-9714841/Euro-2020-Declan-Rice-handed-face-mask-chats-Czech-duo-Tomas-Soucek-Vladimir-Coufal.html

Tomas Soucek: Czech Republic need to take the positives from England defeat at Euro 2020
Tomas Soucek said the Czech Republic will take the positives from Tuesday’s 1-0 UEFA Euro 2020 Group D defeat by England into the round of 16.
https://www.whufc.com/news/articles/2021/june/23-june/tomas-soucek-czech-republic-need-take-positives-england-defeat-euro

Academy midfielder Keenan Forson on how UEFA Euro 2020 inspired his off-season
Even while taking a break from playing football, Keenan Forson – like so many of us – has been enraptured watching it.
https://www.whufc.com/news/articles/2021/june/23-june/academy-midfielder-keenan-forson-how-uefa-euro-2020-inspired-his

UEFA Euro 2020: What’s next for West Ham United’s representatives?
The UEFA Euro 2020 group stages came to a dramatic end on Wednesday night as France, Germany, Portugal and Hungary battled it out in Group F’s conclusion.
https://www.whufc.com/news/articles/2021/june/23-june/uefa-euro-2020-whats-next-west-ham-uniteds-representatives

No time for Fab as Poles sent home
West Ham United goalkeeper Lukasz Fabianski was an unused substitute for the third successive game as his Poland side were sent tumbling out of the Euros.
https://kumb.com/story.php?id=135706

* Indicates foreign language link, translator required
* Something to say about this story? Please visit the KUMB Forum to leave a comment.