A source close to Nottingham Forest has told KUMB that Joe Worrall is unlikely to leave the club in the near future.

With David Moyes desperately searching for replacements this January as cover for Angelo Ogbonna and Kurt Zouma, Worrall's is one of many names that has been floated in recent weeks and days.

However our Forest insider insists the 24-year-old will not be going anywhere this January. "it’s unlikely he will leave as he is an absolute Forest fanatic," our source told us.

"He was a season ticket holder before and wants to help them get promoted to the Premier League - while it is likely he'll be made club captain next season.

"Worrall has already turned down Premier League clubs including Southampton, Aston Villa and Leeds Utd. He’s not in football for the money and is a consummate professional."

Yet our source agreed that Worrell definitely has the potential to make a successful career as a top flight centre half.

"He has the necessary ability in bundles and a loan spell with Rangers a couple of years ago did him the world of good, despite a poor start," they said. "He's a monster at the back and a potential international central defender." 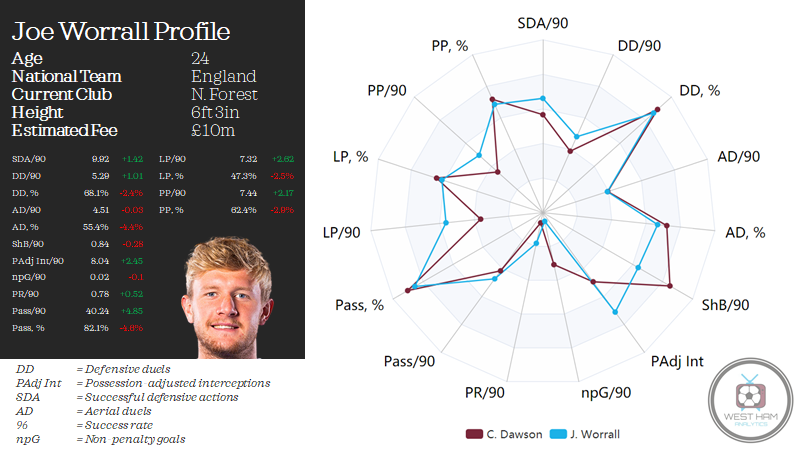 Statistically Worrall fares favourably with current West Ham star Craig Dawson - (as you may see from the above graphic, as provided by KUMB Podcaster Callum Goodall aka @WHU@Analytics) - although the difference in quality of opponent should be taken into account.

Defensively solid, the Hucknall-born Worrall enjoys a high passing accuracy rate - as does Dawson - while standing out on interceptions and defensive duels.
* Something to say about this story? Please visit the KUMB Forum to leave a comment.