We're barely a week into the off-season and already West Ham have been tentatively linked with a whole series of players from around the globe.

And while KUMB cannot vouch for the authenticity of any of the following links, here's a round-up of the latest names to be associated with a summer switch to east London... 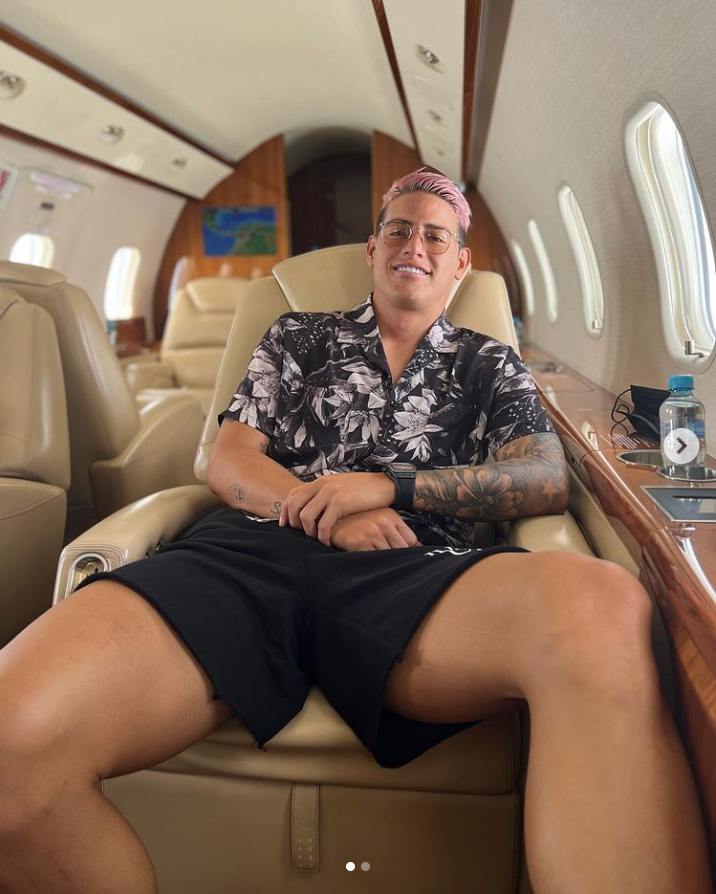 The Colombian international - that's 'Ham-ez' to you - has already failed in the Premier League during a brief stint with Everton but according to us.marca.com, could be offered a route back to England with West Ham who "would be willing to sign him".

Currently under contract with Qatar side Al Rayyan, the former Real Madrid and Bayern Munich striker was pictured on Instagram - with pink hair, to boot - on a private plane yesterday along with the caption "Where are we going then?" (See above.)

If it was London, he's certainly taking his time to get here - unless he employed Kurt Zouma's court bodyguards to keep him under wraps, that is.

Here's one you probably haven't heard before. According to nehandaradio.com (no, me neither) West Ham and Arsenal (well it makes a change from Villa and Newcastle) are keeping an eye on the progress of Ipswich youngster Chirewa.

Just 18 and out of Shenfield, news of West Ham's interest in the forward was revealed by Ipswich site TWTD who report that "Chirewa was one of the top performers for the U23s during 2021/22, scoring 12 times as the side coached by Kieron Dyer topped the Professional Development League Two South."

He's currently "one of the most sought-after Bundesliga players" according to ligainsider.ed. A 24-year-old left back, the Hoffenheim star is reported to have been watched by West Ham, Borussia Dortmund and Liverpool amongst others.

"I would have liked to play internationally with Hoffenheim and It's still a dream of mine," said Raum - who recently extended his contract - in a recent interview, while acknowledging that to do so may require him to make a step up.

Back in the day a 'hickey' was something excitably young teenagers often returned home from a school disco with. These days he's better known as a Bologna player who is rumoured to have been the target fo a £25million bid from Arsenal and a slightly less valuable offer from West Ham (there's a surprise).

It is believed the 19-year-old Scot, who operates at left back will earn a big money move this summer. Time will tell whether that is indeed to London or elsewhere.

Today Foot Sur 7 has touched on the situation regarding Alphonse Areola, who they say is "about to settle his future definitively" with West Ham looking to pay up to £12million to make his loan deal from Paris St Germain permanent.

A poorly translated story claims that: "Barred by tough competition in the Parisian cages, the tricolor goalkeeper has chained loans in recent years". Paris are thought to be keen to sell in order to gets the player's wages off of their books - although given their owners' vast wealth, that is unlikely to be uppermost in their minds.

Koln's (or is that Cologne?) Tunisian defender was linked with a move to West Ham last summer before the Kurt Zouma deal was done and German national Bild are currently running with a headline stating "Three top clubs in the fight for Skhiri."

Citing West Ham United, Benfica Lisbon and Olympique Lyon it's quite conceivable that the newspaper have picked the European equivalents of Aston Villa and Newcastle who are seemingly linked with 80 per cent of players along with West Ham these days.

Said to be available for 8 to 10 million euros, at 27 Skhiri is entering his peak years for the def mid and coach Steffen Baumgart certainly seems ready to sell. "Should we receive an offer for Ellyes Skhiri that is in line with the market, we would also deal with it," he said, before adding: "But we haven't received it yet." If that isn't a come and get him plea...

The talented young winger is another to have been cited as a West Ham target in transfer windows of yore - and Bayo has given his club the clearest indication yet that he views his future in pastures new.

The 23-year-old Guinean international, who is apparently "being courted by West Ham and Frankfurt" plus current club Clermont's divisional rivals Marseille told After Foot on RMC (which sounds a bit like a Gallic Ricky Gervais series) that he wants to find a new club this summer.


It sounds like a lazy link and almost certainly is a bit fishy, but for the porpoises (see what we did there?) of this article we're compelled to share the news that the Daily Telegraph, that bastion of ITK news (not) claim David Moyes wants to sign the talented winger from relegated Burnley.

He only spent a year in England but the 25-year-old gave a good account of himself despite being unable to prevent the Clarets from falling through the Premier League trap door last week. A minimum fee relegation clause means he could be a good catch - especially if the suggested fee of £17.5miliion is correct.


That's your lot for today - join us once again tomorrow when we'll have a whole bunch of new and almost certainly equally spurious transfer links for you to digest.
* Something to say about this story? Please visit the KUMB Forum to leave a comment.