West Ham United supporters are thirsty for news of further moves in the transfer window with the club's first pre-season friendly in Switzerland just one week away. 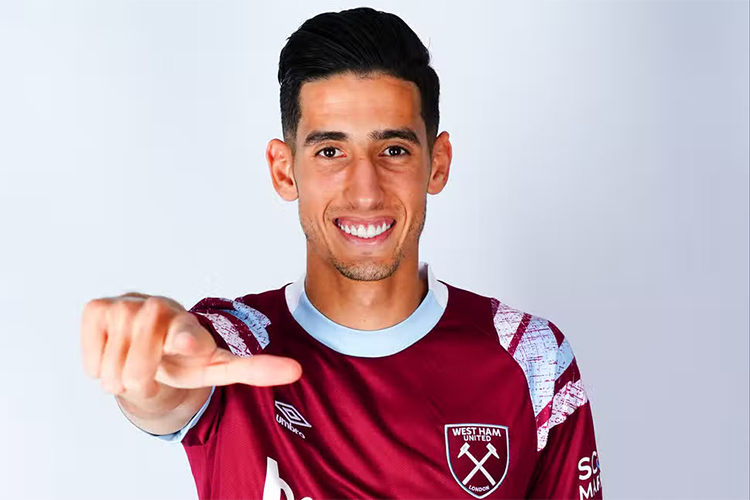 The Moroccan international was David Moyes' first signing of the summer

Top of the list for the manager and Head of Recruitment Rob Newman are a striker, attacking midfielder and left back now two of the squad's previous vacancies have been filled.

The duo have considered a long list of players based both domestically and abroad, as they seek to introduce individuals of sufficient quality and temperament to complement the existing squad.

Perhaps the most important squad place to fill is that of someone to support Michail Antonio in the dedicated striker's role - a position the Jamaican international has been carrying alone since fellow forward Sebastien Haller was sold to Ajax nearly 18 months ago.

While Chelsea's talented youngster Armando Broja, who spent last season on loan at Southampton remains right at the top of Moyes and Newman's wanted list the pair have made enquiries regarding several alternatives in recent weeks including Watford's Emmanuel Dennis and Clermont's Mohamed Bayo.

And while KUMB revealed earlier today how the club's bid to sign Jesse Lingard appears to have hit a stumbling block as a result of the player's preference to remain close to Manchester, the likes of Dutch international Arnaut Danjuma and Rennes' Martin Terrier - a former team mate of new signing Aguerd - have also been sounded out with regards to filling the vacancy created by the departure of Andriy Yarmolenko.

Additionally, the possible impending departure of players such as Niko Vlasic and Said Benrahma, who could also move on for the right price may yet create further vacancies. Both have been linked with moves away from the club, either on a temporary or permanent basis as Moyes seeks to re-shape his squad for the coming campaign.

The same can be said for the left back role, currently occupied by Arthur Masuaku and Aaron Cresswell - who is set to enjoy his 33rd birthday in five months' time. While Moyes considers the latter to be very much part of his first team squad still - the former, less so - it is recognised that the position requires strengthening ahead of the beginning of the 2022/23 season.

Juventus left-back Luca Pellegrini - no relation of former manager Manuel - has been linked with West Ham for the past three transfer windows now but is back on the agenda once again, while Moyes and Newman are yet to rule out making an offer for AZ Alkmaar's Owen Wijndal.

Other players in the frame include Danish international Joakim Maehle, who while right-footed can also feature on the left and Rangers defender Calvin Bassey, who is set to line up against the Hammers later this month when West Ham face the Europa League finalists in a pre-season friendly at Ibrox.

Additional vacancies could yet arise at centre half, where Issa Diop has been linked with a move to Ligue 1's Lyon and in central midfield, although the prospect of Tomas Soucek leaving the club appears to be little more than agent talk, with the Czech midfielder having failed thus far to agree an extension to his existing contract.
* Something to say about this story? Please visit the KUMB Forum to leave a comment.