We can't see you sneaking out; 'wall' review to take place

West Ham say they will investigate alternative solutions to separating home and away supporters at the London Olympic Stadium following a backlash against the screens that were put in place for the opening game of the season against Manchester City.

Home fans situated close by the travelling fans were disappointed to note that the two had been kept apart by the installation of a steel shield, which was put in place with view to preventing missiles being thrown, according to the club.

Yet following a number of complains from season tickets holders who complained that the atmosphere had become distilled as a result of the new screens, West Ham say they will look into what else can be done to ensure the safety of all inside the stadium - even if they cannot guarantee a different solution. 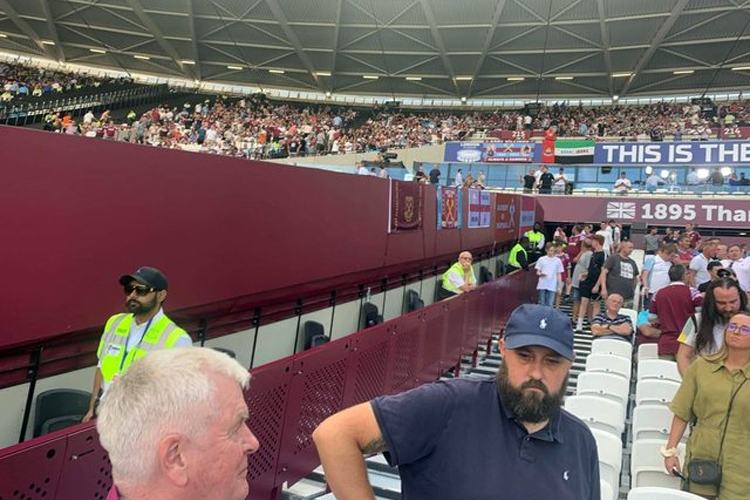 Bring down the wall: fans are unhappy about the latest addition to the LOS

"The safety of all supporters and staff is of the utmost importance to the club and London stadium," read a letter from the club, seen by KUMB.com, in reply to a complaint.

"The side of the West stand was extended at the start of the 2021/22 season for safety. Following the significant disorder experienced at the Rapid Vienna home match last season, that resulted in a fine from UEFA, additional measures have been required by the relevant authorities and in order to further protect the safety of our supporters and staff.

"Both London Stadium and the club safety teams acknowledged the requirement for further safety measures to be put in place and the club also proposed other options for this area during the 2021/22 season.

"We have requested that stadium management explore alternative options for the design of the side of the stand, however, the safety of all supporters and staff must always be our first priority.

"So whilst we are working with them to ensure all options are fully explored we are unable to guarantee that the current safety arrangements will change."

Fans took to the KUMB Forum in their droves to complain about 'the wall', following the game against the reigning league champions.

"I don't think I've ever been screened off from opposition fans in any ground in the UK before," wrote Doc H Ball. "Fences, gaps, moats etc yes - but not an actual wall. Is this a first?"

And MJD22 added: "This wall is a big problem and it needs to be addressed by the club. If there is no good reason for it, it has to come down.

"There is a big gap between sections 112/113 and the away fans, so it's not stopping anyone from climbing over. It's not stopping people from throwing things over either, as that was still happening.

"Fan response to the digital-only tickets made the club change their minds quite quickly and in my opinion, this deserves the same reaction from us fans."
* Something to say about this story? Please visit the KUMB Forum to leave a comment.