Drop your prices, or we'll sue

West Ham have confirmed that prices for refreshments will be reduced slightly whilst talks continue with the stadium's caterers - while threatening legal action should their demands to shrink costs further not be met.

Delaware North came in for some heavy criticism last week after fans were charged in excess of £7 for a pint of lager and more than £4 for a cup of a popular soft drink.

And following a steady stream of complaints, the club indicated they would be raising their concerns with the catering company.

While the club have confirmed prices will reduced, they stated that they expect to see further reductions in Delaware's prices - although they would not be in place for this evening's Conference League tie against Danish side Viborg.

"Discussions are ongoing with London Stadium and Delaware North to reduce food and drink concession prices on matchdays," read a club statement issued a matter of hours before the gates open for this evening's match.

"In the interim period, food and beverage prices in all general admission areas at London Stadium will be reduced for tonight’s UEFA Europa Conference League tie against Viborg but not to the satisfaction of West Ham United.

"If the club does not get a satisfactory resolution, it will commence legal proceedings against London Stadium. 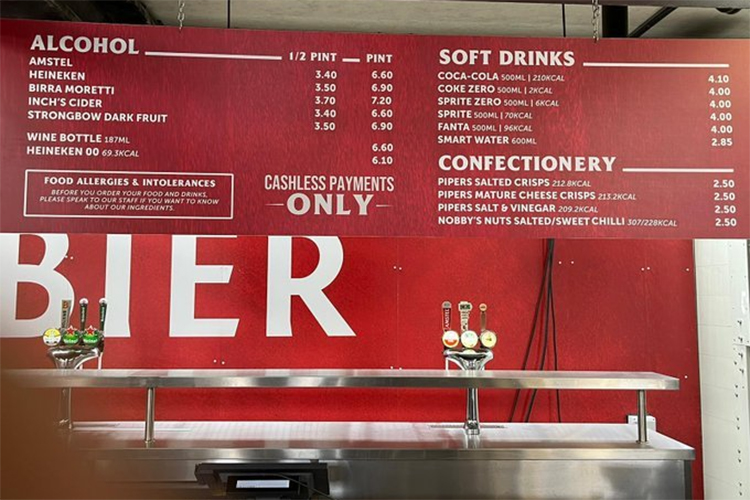 Refreshment prices have been slightly reduced for tonight's UECL tie

"The food and beverage concession agreement clearly states that prices must not be greater than the mean average of equivalent prices charged at comparable clubs. Whilst we have made some progress, current prices do not reflect that.

"The club will not rest until a satisfactory outcome is agreed for our supporters."

Despite West Ham's position, Delaware North recently advised a supporters' group that they were not compelled to abide by the terms of the concession agreement.
* Something to say about this story? Please visit the KUMB Forum to leave a comment.